I would title this Man Crush Monday but it’s not Monday. This is definitely a man crush though. Holy hell this dude is sexy!

Miyavi is a musician from Japan born September, 14th 1981, he first started out in the visual kei band Due le Quartz before going solo in 2002.
I first learned about Miyavi back in 2012 while I was browsing through the Unpopular Kpop Opinions tumblr blog and someone said that G-dragon’s (of BIGBANG) Alive era look reminded them of Miyavi.
Now, usually when people compare artists (or does the “if you like THIS, you’ll like THAT” thing)I don’t pay attention, just because someone says this person sounds like XYZ doesn’t mean I’ll think so too.
But I liked his hat in the picture and I have a lowkey thing for piercings (not as big as my glasses thing. Glasses :3 ) and he looked like he would have a rock style of music and I like Jrock so I was like Okaaaaay, let me try it out.

Thank you past Kayti for being so smart!

Survive is the first song I heard by him.

You know when you stumble across a song and you’ve barely heard any of it but you already know you’re going to love that song so hard and play it anywhere, any day, anytime?
I was hooked in ten seconds practically.
The music video is simple, shot in black and white with a static camera all it has to rely on is Miyavi’s on energy, and the dude has a full on solar system of energy. I’s luuuuuuuuuuv this song.

It took me a bit to figure out what he was saying, this was back when he started putting out a lot of videos in English. Someone said that the way he spoke use a lot of rhotic vowels and every time I think of that, I’m all “you mean E-rotic.”

And then there are his tattoos. I cannot express in an articulate manner how much I love his tattoos. It’s like a painting. They look like art. I love how they look like brush strokes and I’m still trying to peep if they’re everywhere. As in, all over his body. As in, ALL over his BODY.

then he dropped Secret which is full of this

(Well actually, that wasn’t part of the video. It should have been god dammit! Uwah.)

Despite that music video I still thought I was in control of my fan girl feels (feel free to laugh at this point). And then I found out he was going to be in a movie.

Okay, don’t hate me but up until about two weeks before Unbroken premiered I had little to no idea what the movie was about. If you asked me about it my response would have been, “It’s this WWII movie STARRING MIYAVI! SQUEEEE! ASDFGHJKL! ER MAH GAHD! YAAAAAHS.”

Then it was like, “oh. It’s not starring Miyavi.”

But this was MYV. I was gonna watch it anyway. And when it finally got to his scene and hour, eighteen minutes, and seventeen seconds into the movie (wut) I legit paused and squeed for like a minute. This happened every time he said a line so that scene took quite a while to get through.
And oh my god, can he do the intense stare so well. ‘Scuse me while I take off my panties. 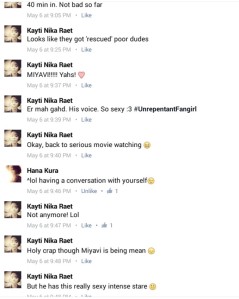 The other actors and the rest of the movie was good too. I definitely recommend it and not just because Miyavi played the hell out of his role. Can we get more movies with him please?

Oh and when he’s not busy being king of the sex gods, he’s also the father of two adorable little girls (my ovaries…),

and quietly dropping music videos like this one HERE.

Did you know Saturday, March 14th, has been crowned Steak and BJ Day, a celebration of two things guys love – steak and blow jobs.

And falling exactly one month after Valentine’s, Steak and BJ Day’s existence suggests to me that it’s assumed that holiday – the pink and red and chocolaty one – is really for women and we love it

For real – because let me tell you, I fucking hate Valentine’s Day.

Have always hated it.

and I kinda think it’s for losers or those lame, sappy couples I would never, ever want to be.

now I’m passing judgment, which I swore I wouldn’t do, but sometimes it slips. Shit happens.

Anyway, back to Steak and BJ Day

I gotta say, I’m down

and it sounds all kinds of awesome. 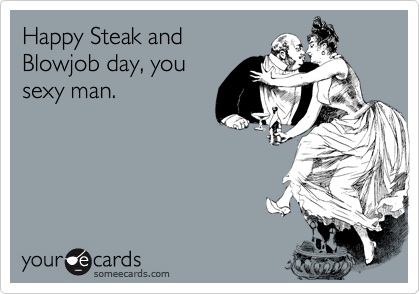 It’s not sappy and saccharine

It’s straightforward and in your face – pun intended – and I like that.

And for the record, some of us girls really love our steak and blow jobs.